No matter what the season, there are plenty of reasons to celebrate Big Orange Fever in East Tennessee whether you are just visiting or live in the region. UT sports are a huge part of community life, everyone “bleeds” orange here as they tell newcomers. At the writing of this post, March Madness will begin soon and sports fans are following the Tennessee men’s and women’s basketball and softball games. Competition in all events is always exciting and the games are great to watch. 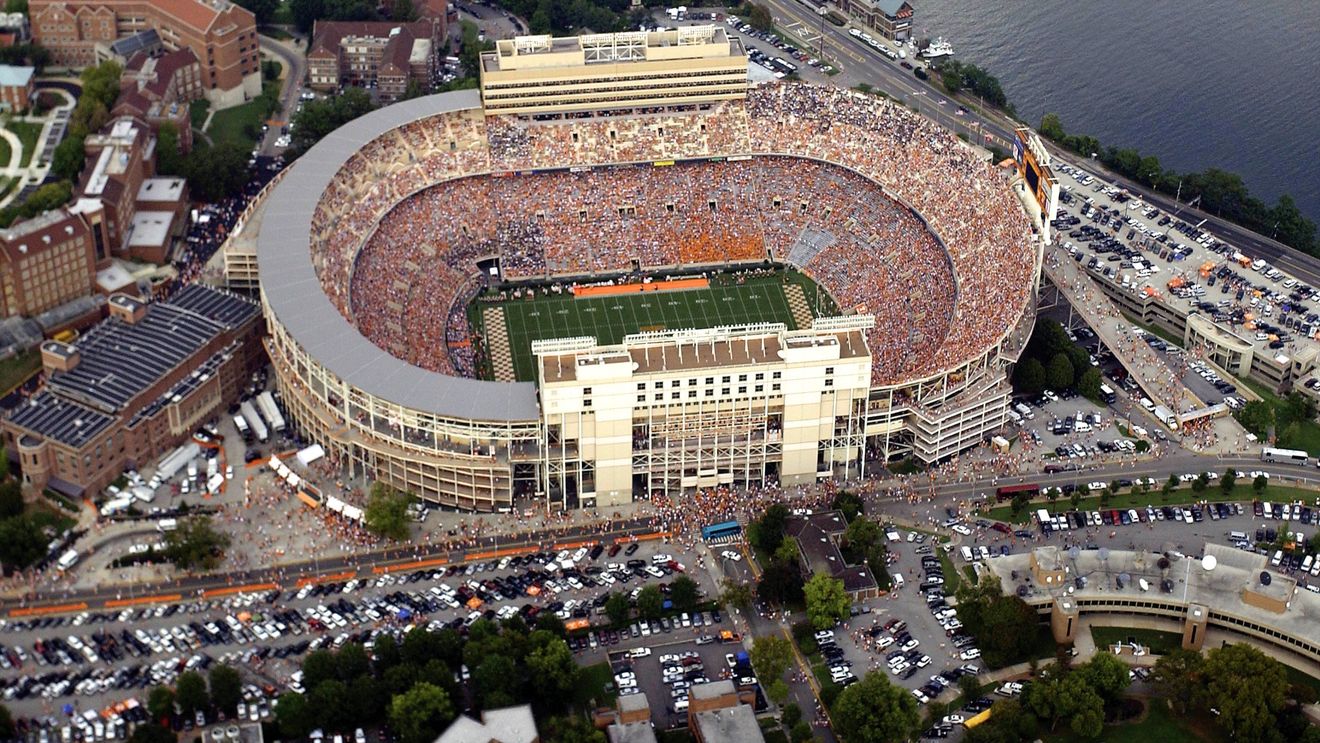 Great sports have great traditions. If you are going to Celebrate Big Orange Fever in East Tennessee you’ll need to know them. Here goes!

Official Logo. It was the year 1964 when the University of Tennessee athletics official logo became the Power T. The T first appeared on the side of the Volunteers’ football helmet, replacing the numbers. After several updates in the logo also became the symbol for the Knoxville Campus.

Team Colors. Orange and White are the official collegiate colors for all UT teams. The selection was passed by student vote in 1891 and came from the common American Daisy, which grew profusely on campus around The Hill. The area is located between historic Ayres Hall and Neyland Stadium.

The Mascot. Beloved Smokey is the Volunteers live mascot and was chosen during a football game in 1953. The original Smokey was a prize-winning blue tick hound with a great personality. The story goes that only real ‘Houn’ Dogs’ or coon hounds could compete and when they were all lined up, when Smokey’s name was announced he threw back his head and howled. The students cheered and he barked again. It kept going and the students had chosen their mascot. There have been many generations of Smokeys since then, still being raised by the same family who provide the mascot for the team each year. 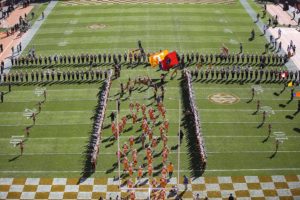 Entering the Field. “Running through the T” is called one of the greatest entrances in all sports. The famous “T” is formed by over 300 members of the Pride of the Southland Marching Band. When Tennessee Volunteers come onto the field they burst through the “T”, you can feel the excitement in the fall air. Fans will make it a point to arrive early just to witness this exciting moment. Everyone knows that “It’s Football Time in Tennessee”.

Team Song. Attend a UT football game and you’re sure to hear “Rocky Top”. This song was written by a Gatlinburg couple in 1967 and was recorded by the Osborne Brothers, and also became a country hit for Lynn Anderson. Did you know that the official fight song is “Down the Field”? 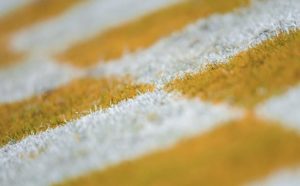 End Zone Design. When you see the Orange and White Checkerboards in the end zones, you know it belongs to the UT Vols. The pattern dates back to 1921 and today you can find the design in all sports facilities on campus. 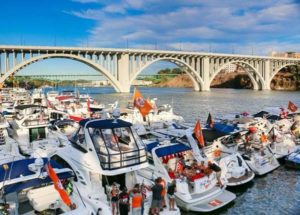 Most Unique Tradition. Knoxville is located on the Tennessee River and in 1962 because of traffic George Mooney, former Vol Network radio broadcaster, tied up his runabout at the dock across from Neyland stadium. He started one of the most unique traditions in college football where now over 200 boats in the Vol Navy dock each game day. 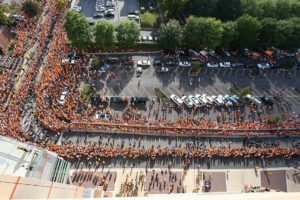 The Route to the Stadium. When the Tennessee Volunteers football team walk the traditional walk to the stadium they pass through The Vol Walk. Fans line the street and the Vols pass through a literal sea of people. The walk has been shortened up in recent years, but it is a great way for fans, both young and old, to meet and cheer on their heroes. 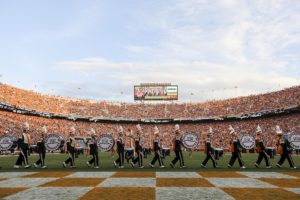 The Music. In the evenings you may see the lights coming from Neyland Stadium and hear music during the week as The Pride of the Southland Marching Band practices. This band program has grown to over 400 students and appears at all UT home games and most away games. They play before more than 850,000 spectators and millions more on television. The Pride also has played at 10 consecutive Presidential Inaugurations, from Dwight D. Eisenhower to George W. Bush, representing the State of Tennessee.

Combine all these beloved traditions and you have the recipe for great Tennessee football and lots of fun! 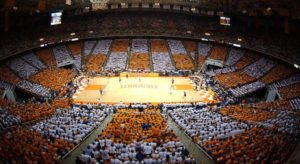 The Tennessee Vols Men’s Basketball compete in Division I of the National Collegiate Athletic Association (NCAA) and the Southeastern Conference. 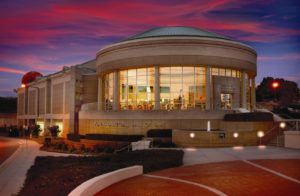 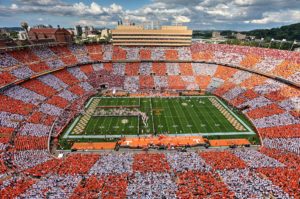 There is nothing like attending a UT Football home game in Neyland Stadium. Everyone needs to attend at least once in their lifetime. Tennessee is part of the SEC’s Eastern Division and competes against Florida, Georgia, Kentucky, Missouri, South Carolina, and Vanderbilt. Traditionally, the Vols’ most intense rivalry is against the Alabama Crimson Tide. The game is usually held the last part of October and if you can catch a home game in full autumn colors it will be something you will never forget. Definitely put it on your bucket list. 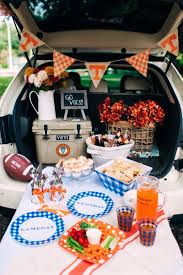 Attending a UT football home game with friends is made so much more memorable with a fun tailgate party prior to the game. It’s simple to plan a perfect tailgate party by following these 6 steps.

2. Celebrate by wearing team colors – Orange and White of course!

4. Keep the food simple and at proper temperature (cold/cold and hot/hot). Coolers with ice for cold food and drinks. To keep foods hot longer, heat clean bricks in your oven and then tuck around towel-wrapped hot containers in a cooler.

6. Bring easy cleanup items, trash bags, paper towels, some wet dish cloths in a plastic z-lock bag, paper and plastic eating utensils. You want to have a quick and easy pack and store when tailgating is finished. 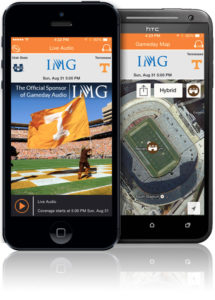 The University of Tennessee offers a free Gameday App which you can get from either Apple iTunes or Google Play which provides everything you need to know for both home and out-of-town games. You’ll have at your fingertips social updates from Twitter and Instagram from the team, on-campus and stadium maps and parking information to help with your plans, real-time stats, pregame events, weather updates, free live game-day audio and a play-by-play feature. Download your app to enhance your game-day experience.

Would you like to be kept informed weekly about all UT Sports? Sign up for their official weekly newsletter called #GBOInsider. Besides getting all the latest updates, you will receive promotions and be able to choose and purchase seats. Get information on all UT Sports, see feature videos and have access to upcoming event schedule. This is an excellent resource for all UT sport events. Tennessee Athletics supports softball teams, rowing teams, golf competitions, soccer teams, swim teams, volleyball, cross-country and much more.  It’s so easy to celebrate Big Orange Fever in East Tennessee. 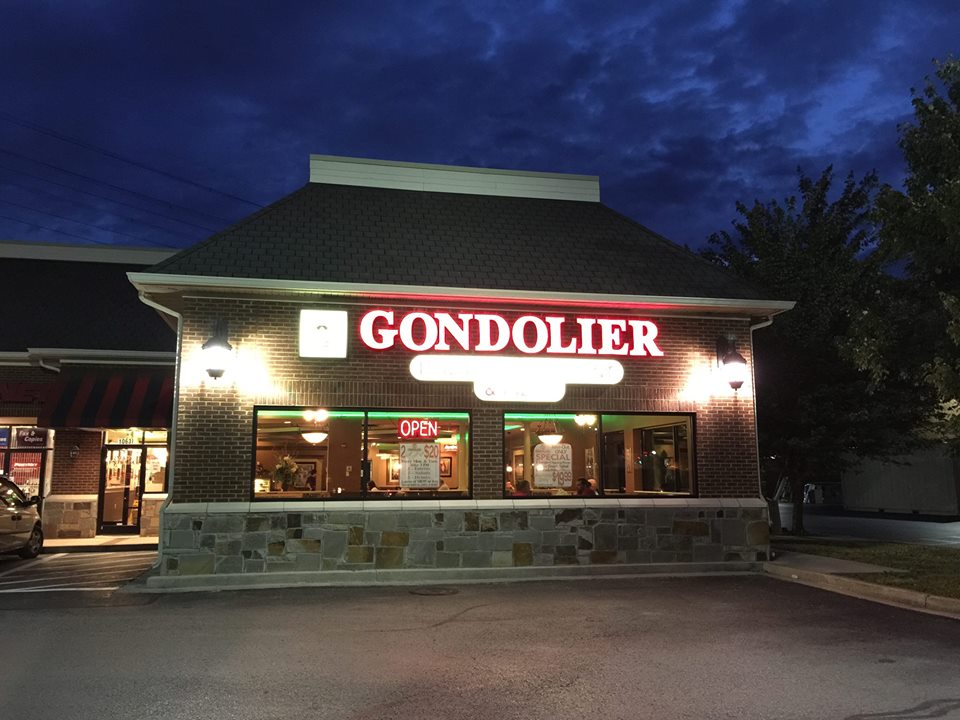 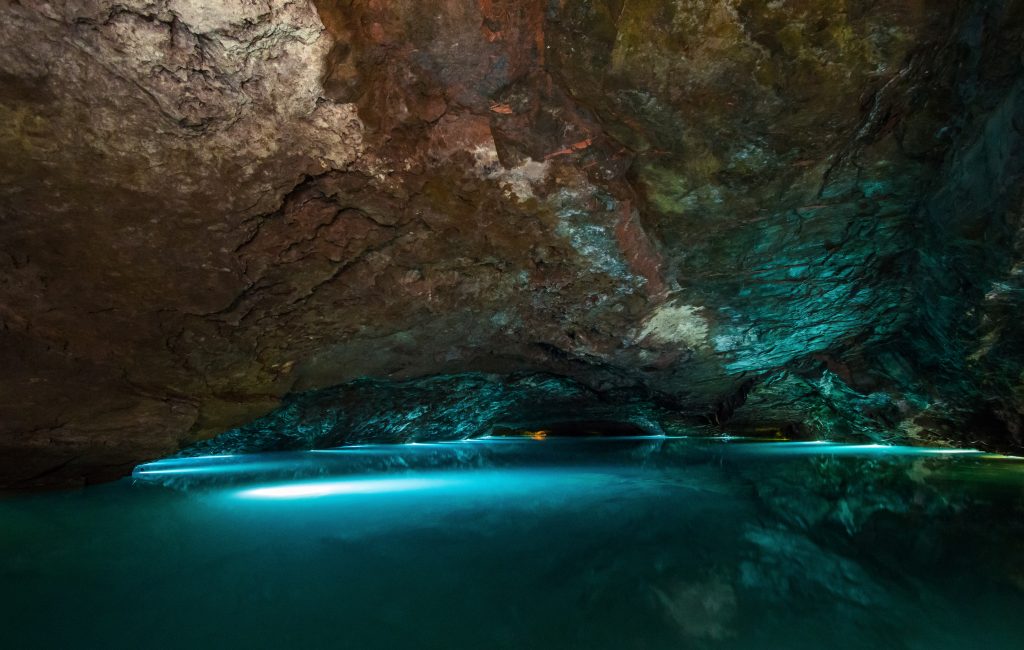 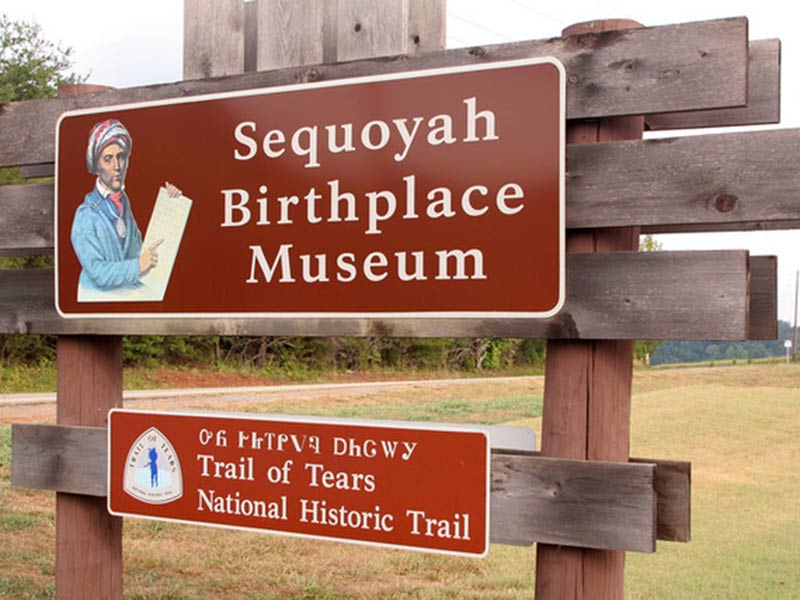